Monday 6th February 2017 was the 65th anniversary of the Queen’s accession to the throne – her Sapphire Jubilee. As we had exactly six ringers at our practice we rang a quarter peal to mark this occasion. It was also the LWASCR’s Challenge Month so we were able to count it as our challenge.

In 2016 we rang three quarter peals – all to celebrate birthdays. We rang one on the Queen’s 90th birthday and one for her Official Birthday. In November Ian Darby (who started ringing just over a year before) rang his first quarter peal for his birthday. All of these quarters were rung by Pattingham ringers.
Other quarter peals were attempted when we were joined by other ringers but unfortunately they were unsuccessful. 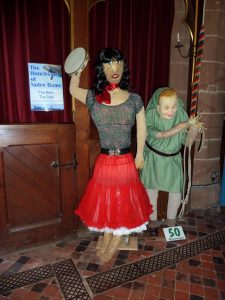 The third SCARECROW FESTIVAL was held in Pattingham in September 2015.

The bellringers moved on from their previous themes related to television programmes and this
time found their inspitation in the bell tower of Notre Dame Cathedral (as told by Disney).
The tableau this year featured Quasimodo and Esmereralda. As in previous years visitors were allowed to chime a bell themselves in return for a donation of 50 pence.

Further details of the festival and pictures of all the scarecrows are on the church website. 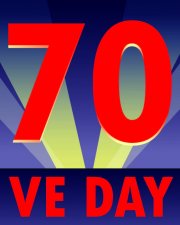 At 11 am on Saturday 9th May 2015, as part of the events to commemorate the 70th anniversary of VE Day, members of the local band rang a quarter peal of Grandsire Doubles. Quarters had also been rung for the 40th, 50th, and 60th anniversaries. Norman rang in all of those as well as this. Geoffrey rang in the 50th and 60th and John in the 50th. Chloë’s mother (Gail Baggott) rang in the 40th and 50th anniversary quarters. 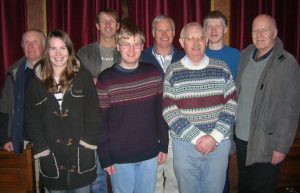 On 4th January 2015 a peal was rung to mark the 150th anniversary of the augmentation of the bells from six to eight in 1865. A tablet in the ringing chamber records the first ring on the augmented bells on 8th January 1865 so the peal was rung almost 150 years thereafter. 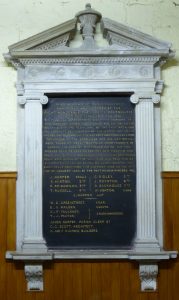 The peal band consisted of four Pattingham ringers together with two ringers from Tettenhall and two from further afield. It was significant as the first peal on the bells which included a local ringer since 1995. Three of the band (Chloë Darby and Stephen and James Dann) lived in the village when they were born and are all current members of the band. It was the first peal rung by Geoffrey Dann since before the birth of his sons, Stephen and James, and it was also the first peal Stephen and James had rung together.
It was conducted by James Dann, the youngest member of the band, who called Parker’s 12 part, which is an old composition. although not as old as the bells.
One photograph shows the tablet in the ringing room which records the augmentation of the bells and the other is the peal band (left to right: David Hope, Chloë Darby, Paul Caddick, Stephen Dann, Philip Jewell, Geoffrey Dann, James Dann, Phil Day). 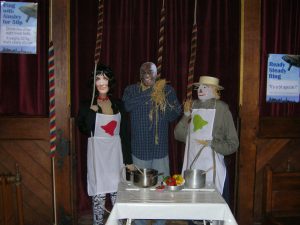 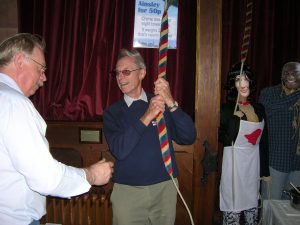 In September 2013 a second SCARECROW FESTIVAL was held in Pattingham.
Having used Strictly Come Dancing as their inspiration two years ago the bellringers turned their attention to a cookery programme. The tableau they created was called “Ready Steady Ring” and included scarecrows representing Ainsley Harriott and Nigella Lawson. Visitors who paid 50 pence were allowed to “ring with Ainsley”, which involved chiming one of the ringing bells while Nigella and Ainsley looked on.
A quarter peal was rung for the Harvest Festival service at the end of the festival.
Further details of the festival and pictures of all the scarecrows are on the church website.

The Walsall and Lichfield Archdeaconries Society, to which we are affiliated, designated February as Challenge Month, in which towers were encouraged to achieve something which they would not normally be able to achieve. During February 2013 all our ringers who attended a practice during that month successfully called at least one touch. For some that was not a particular achievement but for others was the first time they had called anything. 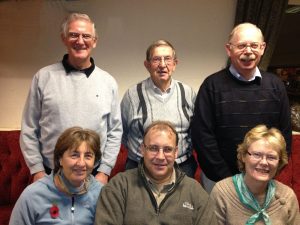 On Monday 5th November 2012 six local ringers rang a quarter peal as a compliment to our vicar on her installation as a Prebendary of Lichfield Cathedral, which had taken place in September. This was Brian Cook’s first quarter at the first attempt. He started ringing in June 2011.
The band (having adjourned to the Club for refreshment afterwards)
Clockwise from front left:
Chris Wycherley, Brian Cook, Janet Bramall, Geoffrey Dann, Norman Bramall, John Whittall 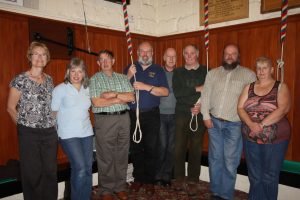 In September 2012 our vicar, Maureen Hobbs, was installed as a Prebendary of Lichfield Cathedral. We wanted to ring a quarter peal as a compliment to her. The Pattingham Bells Run was due to be held on Sunday 14th October during which the bells are rung. As Maureen is also Rural Dean of the Trysull Deanery we decided to invite ringers from all of the other benifices in the deanery with bells to ring a quarter peal with some of our ringers during the Bells Run. Unfortunately the quarter peal was not successful but the runners were able to hear some good ringing as they ran towards the finish.
The band (from left to right):
Janet Bramall (Pattingham), Diane Awkati (Kinver), Norman Bramall (Pattingham) , Chris Pickford (Kinver), Philip Day (Tettenhall), Rex Edwards (Pattingham), Paul Martin (Penn), Gaynor White (Penn and Wombourne) 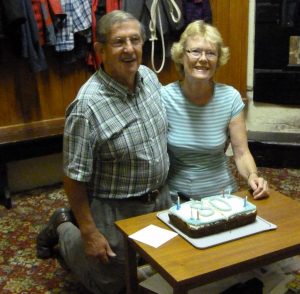 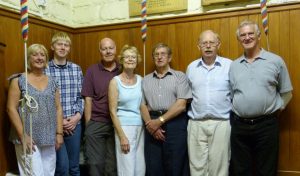 In 1962 there was a shortage of ringers in Pattingham and an appeal was made for people to learn to ring. A number of people answered that call, including a young recently married couple, Janet and Norman Bramall, who both learnt to ring and have both been loyal members of the band since. To mark their 50 years service and to mark their birthdays we rang a quarter peal, in which they both took part, on Sunday 9th September 2012. At the practice on the following day we celebrated Norman’s 80th birthday with a cake.
The photographs show the quarter peal band (from left: Betty Jackson, James Dann. Phil Day, Janet and Norman Bramall, Geoffrey Dann, John Whittall) and Norman and Janet with the cake.

On 27th July 2012 at 8.12 am six ringers chimed all eight bells for three minutes. This was part of the “All the Bells” performance to mark the start of the London Olympics. 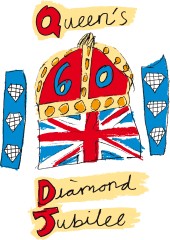 On Sunday 3rd June 2012 we marked the Queen’s Diamond Jubilee by ringing after the Songs of Praise which was held in the evening in the Village Hall. It should have been an open air service following a village picnic on the playing fields but due to inclement weather both were held in the Village Hall.
We first rang all 8 bells to call changes, which included 60 consecutive rows of queens. Brian and James Cook, who had both started to learn to ring last year, were part of that band. The remaining six ringers then rang a quarter peal of Plain Bob Minor. 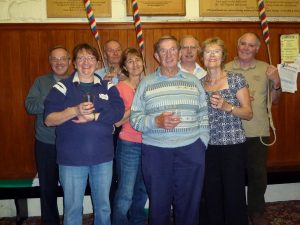 Friday 7th October 2011 was the Golden Wedding Anniversary of Janet and Norman Bramall, who for almost all of their married life have been loyal and regular members of the Pattingham band. On that evening they, together with other current members of the band, including their daughter, and two former members (James Stredder and Tony Wilcox) met to ring a quarter peal of Grandsire Triples. Unfortunately two bells swapped in the 5th part so that it came round after 1050 changes, which is a significant number for a 50th anniversary but is not a quarter peal, nor was it true.
On the Sunday six of those ringers (without the former members) succeeded in ringing a quarter peal of Grandsire Doubles for the evening service. A quarter peal was also rung at St. Thomas, Oxford, conducted by another Pattingham ringer. 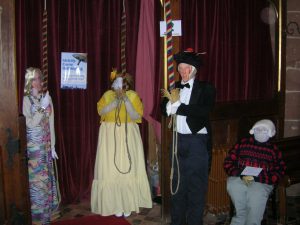 In September 2011 a SCARECROW FESTIVAL, focused in the church with a trail around the village, was held in Pattingham.
The bellringers created a ringing version of Strictly Come Dancing in the church. It included scarecrows representing Bruce Forsyth, Ann Widdecombe and Tess Daly as well as a judge who awarded Ann 5 points. We are not sure whether that was for her ringing ability or her bright yellow frock.
More details and pictures are here. 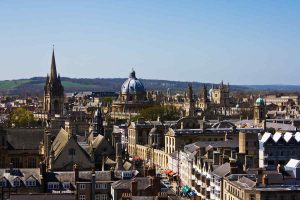 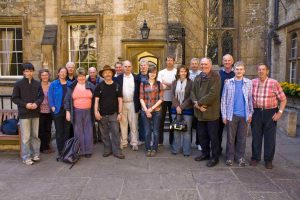 In April 2010 the Pattingham bellringers, together with friends from Claverley, Tettenhall and Penn went on an outing to Oxford where we rang at 6 city centre towers. There was also time for punting for those who wanted to do so. More photos are available here. 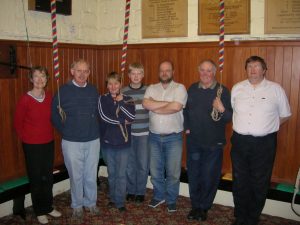 Since 1988 the church Youth Group has been holding monthly Youth Services. The 20th anniversary was in April 2008 for which a special service was held. The bellringers were asked to do “a special ding-dong.” We decided to ring a quarter peal and for the youngest member of the band to call it.
This is the band which rang that quarter peal.
From left to right:
Janet Bramall, Geoffrey Dann, Joanne Bramall, James Dann, Paul Martin, Rex Edwards, Tim Randall. 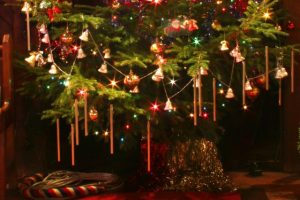 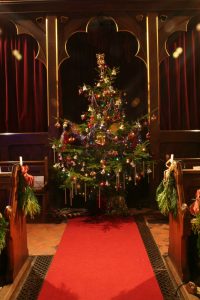 The church held a Festival of Christmas Trees in 2007. This is the tree decorated by the bellringers. For more pictures click here.